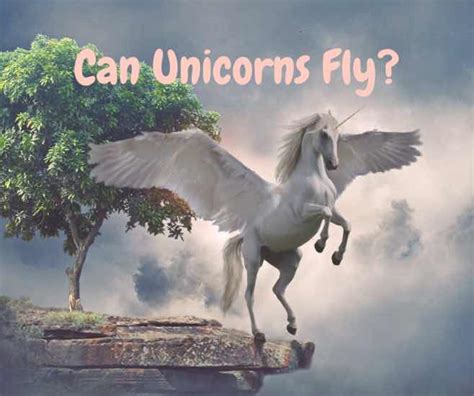 This seems like an odd because unicorns aren’t usually winged creatures, so why should they be able to fly?

Traditionally, unicorns could not fly. They were magical creatures, but they were still bound by the laws of gravity as any other non-winged animal, mythical or otherwise. But can unicorns fly these days? Today’s unicorns are often shown to have the power of flight, even without wings.

It’s obvious why unicorns seem like they should be able to fly. They are so mystical and wonderful, and they are said to transcend boundaries, so it seems the ability to take to the air is not a big step. Have you ever seen a unicorn gliding around up there?

The Traditional Unicorn – Can it Fly?

Wherever you look in historical documents about unicorns, you will find very few mentions of them being capable of flight. UnicornsRule tells us that several ancient legends said stealing a unicorn horn would grant the power of flight. Still there aren’t many references to unicorns themselves flying. This might seem a bit backward, but the traditional unicorn could not fly.

Unicorns were extremely swift, and perhaps the idea of flight was outstripped by the idea that they could transcend boundaries. They did not need to take to the air, because they could move so fast and overcome any obstacles they faced. The need for unicorns to fly wasn’t strong, because they had so many other abilities. Read more about unicorn powers

Unicorn chubby one-horned ancestors were too heavy to fly?

Because the original unicorn was probably more closely modeled on a rhino or an ox than a horse, perhaps it was felt by its creators that it would be too heavy for flight. Wings might have looked out of place on such a bulky creature, and would have raised questions about how they could possibly lift its weight. As the image shifted more towards the graceful white horse we recognize today, wings were not added simply because they never had been.

The focus of unicorns tended to be on their purity and beauty, not on their ability to perform amazing feats. All other magical tendencies associated with unicorns, such as healing and speed, reflect their elusive and beautiful nature. Flying did not add to these ideas, so it wasn’t integral to the mythological image of the unicorn.

What is a Unicorn that Can Fly Called? They are Pegacorns, Unicus, and Alicorns.

A Pegasus is often put into a separate category to unicorns. It’s seen as a mythical creature in its own right. As UnicornsUnified mentions, it originated from Ancient Greek myths, where it appeared as a magnificent horse with wings, but no horn. Its entire focus was on flight, and it lacked many of the other connotations which unicorns had, such as healing magic and innocence.

The connection between these gorgeous flying horses and the beauty of unicorns is obviously strong. Pegasi may not be unicorns themselves, but they can still breed with them.

A foal born to a unicorn and a Pegasus is called an Alicorn, a Pegacorn, or a Unicus. These take on the best characteristics of both parents. They have gleaming, powerful horns in the center of their foreheads, but they also have magnificent wings that allow them to swoop off into the air. Despite the fact that traditional unicorns cannot fly, these amazing hybrids have been recognized for more than 2500 years.

If you’ve ever seen a unicorn with wings, chances are you’ve actually spotted one of these hybrids. As babies, their wings are small and stubby, and not very useful for sustained flight, but as they grow and mature, their wings form into glistening, powerful appendages that can easily lift the creature’s weight.

In case you are interested about unicorns with wings, we have an article about it.

Today, things have changed a bit. It seems that the idea of flight is no longer dependent on having actual wings, and this has freed unicorns from the limitations gravity imposed on them in the past. Many unicorns in books, movies, pictures, and paintings today can fly without needing the wings to do it.

It’s hard to guess why this has changed. It may be that the magic of the unicorn’s horn has been so emphasized that it allows them to do almost anything. It’s possible that we have got more interested in flight as our own technology has developed to allow it. Perhaps the invention of gliders and planes have encouraged us to move away from the idea of flapping wings.

Today’s unicorns are able to glide simply because their magic is powerful. UnicornsRule suggests that this started to change around the 1970s, perhaps in an attempt to refresh the image of the unicorn and make it more enticing and interesting. Sometimes, it’s unclear exactly what mythological creature is being depicted; they are simply shown as magical.

In pop culture, many unicorns can fly without wings; they seem to have become an unnecessary addition, more for aesthetic than anything else. For example, My Little Pony has equines both with and without wings, and yet both are capable of flight. Perhaps the winged ones have taught their non-winged friends a secret or two so they can enjoy their games without an unfair advantage!

It makes sense that unicorns, with their amazing powers, are able to take to the air. Traditional unicorns may not have had this ability, but unicorns are constantly adapting and evolving alongside people. Their association with freedom naturally leads to the idea that they should be able to fly.

Perhaps the newfound power of unicorns also owes a lot to the internet. The internet is constantly pushing boundaries and experimenting with new ideas, so to give a unicorn the power of flight does not seem much of a stretch. With all the amazing, imaginative people in the world, it’s unsurprising that the unicorn is changing and growing alongside people’s imaginations.

You Can Always Consider Yourself

As unicorns share such a magic, it is up to you to decide, can unicorns actually fly. We have picked our favorite items to show you the best of it.

Even Unicorns Need to Learn How to Fly

Inspiring story suitable for all ages.

Kites are such a fun way to make the unicorns fly. There are several cool kites with the unicorn design, for example this unicorn kite with wings.

Have you ever seen a horned or a winged unicorn? Would you know the difference between the two?

Unicorns are magical way for spending the birthday. This amazing unicorn cake topper has wings and therefore symbolize adventurous and great next year coming. Is perfect for big and small unicorn fans.

Although they originated in very different places and represented different things, these amazing mythical equines have grown closer over the years, and today, they share so many of the same characteristics that they are almost indistinguishable. That’s not something we’re sorry about! The more of these breathtaking creatures there are in our lives, the better!

How Long Do Unicorns Live For?

How Long Do Unicorns Live For?

Unicorn Yard s a participant in the Amazon Services LLC Associates Program, an affiliate advertising program designed to provide a means for sites to earn advertising fees by advertising and linking to Amazon.com. When you buy through links on our site, we may earn an affiliate commission.

Magic is always within you. We help to find it and unleash it!
Copyright 2021 - Unicorn Yard